Settled in the States, Reflecting on the U.K.: AOE Research Wrap Up

*Disclaimer: Since this is U.K. based research, football refers to soccer

I must say the U.K. portion of my AOE research was a highlight of my trip resulting in new contacts and a bevy of knowledge. Each interview provided valuable insight related to the status of football, community outreach and, most importantly, how social issues find their way onto the football field.

As I worked to arrange a third and final interview, Lindsey suggested during our interview reaching out to the Charlton Athletic Racial Equality Partnership (CARE). Much to my surprise CARE was wiling and able to share information about the organization and its place in the community.

The biggest takeaway from my U.K. AOE research relates to the use of Charlton Athletic Football Club (CAFA) as a comparison to the Aeros. My initial U.K. research plan focused solely on the work of Kick It Out and a particular program. However, my interview with Lindsey and Hamdi led me to the CAFC and the Charlton Athletic Racial Equality (CARE) Partnership. This opened up the scope of my research and added a new element for the comparative aspect.

“The award-winning partnership [Royal Borough of Greenwich and CAFC] use a wide range of sports and arts based activity programmes as tools to engage with a diverse range of community groups in order to promote equality, diversity and cohesion”

It’s interesting to see how racism plays a role in football. As an American today, the idea of racism in the current sports landscape isn’t something that crosses my mind. In the U.K., deeply rooted historical racial issues still run throughout the game. It must be mentioned efforts such as lifetime bans, are put forth to curb the chanting and hurling of racial slurs during games, a huge breakthrough mentioned by all three interviewees.

The role of sports in both the U.S. and U.K. are similar in that fans flock to games to cheer on their favorite team. Top players become celebrities and children look up to them. The difference lies in the way in which issues are handled. In the U.S. literacy, obesity, cancer research, and “going green” are main areas of community outreach focus. As for the U.K., football clubs have taken it upon themselves to tackle the issue of racism, an issue that affects the community as a whole and has made its way into the action of the game. That’s where partnerships such as CARE come into play with specific goal of fighting issues with the support of a well-known football club.

“CAFC is recognised as one of the most successful football clubs in the country at promoting social inclusion, building community cohesion, and tackling racism”

Looking at the research findings on both sides lends itself to realizing the important role of teams at all levels. Top tier teams are able to reach a larger audience with more money but what about smaller, lower level teams deeply rooted in the community? Organizations such as the Aeros and CAFC are able to make an impact at home, showing their support for the community as much as they support the team.

As I find my groove back in the U.S., I can’t help but reflect and appreciate the chance to interview three amazing people directly connected to the world of football and community outreach to fight social issues. It’s important to take a step back and learn about issues affecting people in other parts of the world, hence the nature of my AOE research. Moving forward, the insights from London interviews will provide a new perspective as I wrap up my graduate thesis. This study abroad trip was definitely worthwhile.

A Week’s Worth of Fun

To think I’ve been in another country for a week now is mind blowing. From agency visits to exploring the typical tourist spots with great people, my trip across the pond has been more than amazing. Here’s a video featuring a few of my favorite things in London.

Tackling Social Issues in the U.K.: First Take on Football and Racism

*Disclaimer: Since this is U.K. based research, football is soccer.

My first solo Underground ride took me to the Hamilton House, home of the National Union of Teachers (NUT). My U.S. research directed me to NUT as a key resource in uncovering the education portion of Kick It Out’s Football and Freedom Education Pack. Lindsey McDowell and Hamdi Addow were gracious enough to share their knowledge of the education pack and state of racism in the U.K.

The NUT and Kick It Out

NUT’s work revolves around equality for those within the Union along with other policy creation and enforcement. Both women expressed the importance of educating citizens about racist behaviors within the classroom and in the community. An interesting finding revealed the root of racism and specific racist actions within football. From the use of the Y-Word in relation to the Jewish community to bananas thrown at players on the field, racist actions are the result of a long history buried within the country.

END_OF_DOCUMENT_TOKEN_TO_BE_REPLACED

Posted in AOE | Tagged area of expertise, curriculum, education, Football and Freedom, Kick it Out, London, National Union of Teachers, NUT, Phylicia McCorkle, racism | Comments Off on Tackling Social Issues in the U.K.: First Take on Football and Racism

Just Touched Down in London Town! 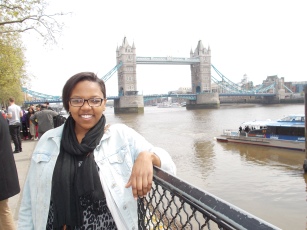 At the Tower Bridge one of many attractions in London.

After months of planning, saving money, and dreaming of traveling abroad, I’ve officially arrived in London. From the double-decker buses to the oh-so-lovely accents, London is taking my breath away.  It’s safe to say I’m definitely not in Ohio anymore!

I can’t believe I never considered traveling abroad. How could anyone not want to experience all the unique features another country has to offer? With so much to see and thousands of people moving around, I remind myself to stop and really soak in my surroundings. I’m looking forward to crossing off my entire Top 10 List of Things to See and Do in London over the next two weeks.  Buckingham Palace down, nine more to go.

My feet may be swollen from walking on cobblestone streets but being present in such a vibrant place like London makes it all worth it. You only live once, right?

The Night (Day) Before London

It’s finally time for me to head across the pond to London! I can still remember trying to figure out all the details and feasibility of this trip. Now I’m more than ready to hop on the VERY early flight for my first international trip.

In this video I share a few last minutes thoughts, questions, etc that are running through my mind. If there’s one thing about me it’s that I LOVE to make a list so this video is fitting. Enjoy!

After several interviews and secondary research, I’m happy to say my U.S. AOE findings were fascinating, lending great insight about how sports use education to communicate with students about social issues.

The U.S. portion of my AOE research focuses on the Akron Aeros Education Day program. The purpose of the program was revealed by Jeremy Heit as “a way to encourage learning in and outside of the classroom with the reward of game experience at the end.”

It was important to hear from teachers who have come in contact with the Education Day program. Three area teachers were willing to share their experience.

END_OF_DOCUMENT_TOKEN_TO_BE_REPLACED

As I prepare for my trip to London, everybody and their mama wants to get packed away in my suitcase and accompany me across the pond. By everybody I mean my friends and family. Because this is impossible (and they are crazy), my Top 10 List of Things to See and Do in London will also feature their suggestions. Although my friends and family physically won’t be with me in London, I’ll be their eyes and ears while traveling abroad for two weeks.

Jeremy Heit, Akron Aeros group sales representative and Education Day program coordinator, stares excitedly out the big conference room windows overlooking the baseball field at Canal Park. Although final construction projects and work is going on, the video board is in full effect. Heit’s excitement is contagious as he talks about the Education Day Program and the upcoming season.

END_OF_DOCUMENT_TOKEN_TO_BE_REPLACED

I have a deep passion for education. My passion continues to drive my interest for the research project at hand. The desire of sport teams to support worthy causes throughout the community continues to be the main focus of my AOE project. More specifically, comparing and contrasting the way in which education is used to teach young children about larger issues in the U.S. and the U.K.

Encouraging students to excel in the classroom is a major focus in the U.S. According to Students First, American students are underscoring in reading and mathematics, with 26% of eighth graders and 27% seniors scoring below the “basic level.” Programs and activities geared toward increasing student scores across all subjects is social cause supported by major and minor league teams in the U.S.

So what is the Education Day program?

END_OF_DOCUMENT_TOKEN_TO_BE_REPLACED

The role of sports in the community and society as a whole is fascinating especially with the amount of media attention teams and players receive on a daily basis. Some may argue sports play a negative role in our culture. On the other hand, teams, players, and entire organizations actually put forth effort into giving back to those who support them most- the surrounding community of fans.

From playing volleyball at Winton Woods High School, going to the driving range with my father, and attending professional sporting events, my interest in sports stretches back to my early childhood. Not until recently has this interest become more of a passion as I’ve found my niche within sports.

With this, I’ve decided to delve into the world of sports and community outreach in the United States and London. My area of expertise (AOE) research will seek to understand how sport organizations use education to connect with children. I will use the Akron Aeros minor league baseball team (MiLB) in the United States and the Professional Footballers Association (PFA) supported campaign in London as the two sport organizations. More specifically, my research will compare Kick It Out’s “Football and Freedom Education Pack and the Akron Aeros Education Day program.

What is the main focus?

Why is this important?

Overall, I’m looking forward to not only learning about the sporting culture in London but also the way in which social causes are approached in both countries. This will be achieved through secondary research and interviews with experts in this subject matter.

This is only the beginning to my journey across the pond. Come back for updates and progress on my AOE research!